A Pinch of Salt 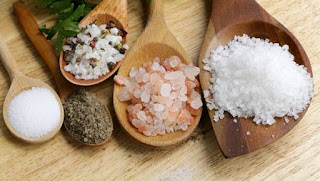 Have you ever given much thought to salt?  Neither had I until I started learning more about how Mama's Mama lived.  There are many different kinds of salt, each with its own use.  Mama's Mama kept at least three or four of them on hand, but you may want to stock more.

This is the stuff in the round box that we have in our cupboard.  It contains a non-caking agent to keep it pouring freely and it's usually fortified with iodine (Mama's salt usually wasn't) which is essential for a healthy thyroid.  Before iodized salt, many people suffered from goiters which were painful and disfiguring.  It was found that goiters were especially prevalent in areas of the country where the soil did not contain sufficient amounts of iodine.  In 1924 the Morton Salt Company started adding iodine to their salt and other salt companies followed suit.  Today, some people choose to use non-iodized salt  since we consume food from so many different regions, if one food doesn't supply the iodine we need, another will.  I still buy and stock iodized salt, probably more out of habit than anything else.

This is used for making pickles or saurkrout or in canning recipes.  It doesn't contain iodine or any anti-caking agents and is a very pure form of salt.  This makes it "extra-strength", so you can't replace table salt with an equal amount of pickling salt or you'll end up with something inedible.  Brines can corrode metal bowls or utensils so if you plan to make pickles and saurkrout, you'll want to get some crocks.  Mama's Mama used pickling salt to preserve meat either by salting or brining.

Compared to the fine grain of table and pickling salt, rock salt looks like...well,...rocks.  This is the salt Mama's Mama put in the old hand-crank ice cream freezer.  The color usually varies from clear to almost black.  You can use rock salt to de-ice your porch or sidewalk in the winter, it will melt the ice, but it may also leave salt stains or pits in the concrete.

The grains of kosher salt are larger than table and pickling salt but not as large as rock salt.  It dissolves very quickly and can be used as a replacement for table salt (I haven't tried using it in baking, though).  Kosher salt got its name because it's the go-to salt for curing meat which is part of the koshering process.

This is the pink stuff you see everywhere now.  The original type comes from Pakistan, but it can also come from Hawaii or Utah (if you visit Harmon's grocery store in downtown Salt Lake City, you can shave your own salt from an enormous crystal displayed in the Deli).  Himalayan salt contains the same 84 trace minerals and elements that are present in the human body.  It is believed to be the purest form of salt on earth, having been protected from environmental pollution.  Table salt is processed with bleach and heated to extremely high temperatures and contains synthetic anti-caking agents, so Himalayan salt appeals to people looking for a more natural, less processed salt to put on the table.  It is usually sold in large crystsal form with a grinder.  If you get tired of sprinkling salt on your food, you can purchase a salt slab that you can actually cook your food on so it's salted during the cooking process.  That would be an interesting kitchen tool to have!

Sea salt, either flaked or crystalline adds a burst of flavor to vegetable or fish dishes.  The flavor varies by the region where the salt was harvested.  When I lived in Costa Rica, we loved the delicate fleur de sel that was harvested right on the beach by evaporating ocean water. I would love to have a huge bag of that (and the coffee...best I've ever had, and that was the cheap stuff!) for my pantry.

Salt is very vulnerable to humidity.  In Costa Rica I stored it in glass jars with a dessicant.  Mama's Mama had an odd-looking ceramic container that looked like a tall coffee mug with a bend in the middle, called a salt pig.  The bend helped keep moisture out to prevent the salt from caking, this way she could keep it by the stove where it was handy without it getting ruined.  The mouth of the salt pig was large enought to get a pinch with her fingers or to spoon some out easily.

How Much to Store

Honestly, I don't think you can store too much salt.  I store a ton of a wide variety it (I am only a few pounds shy of being completely literal about that).  When I do my Just in Case thinking about what would happen if services we depend on everyday were suddenly gone, one of the things I try to include in my planning is "things that replace money".  Salt is an easily divisible, very economical yet entirely necessary bartering tool.  I could trade a bag of salt for a flashlight battery or something else that I need.  Salt is something worth having more than enough of.

Even artisan salts like sea salt are relatively inexpensive so practicing the "need one, buy two" rule is very easy to do.  If there's a type of salt on this list that you don't normally buy and use, but want to have on hand, this would be a good time to get some, while you're thining about it!

Email ThisBlogThis!Share to TwitterShare to FacebookShare to Pinterest
Labels: In the Pantry, Survival